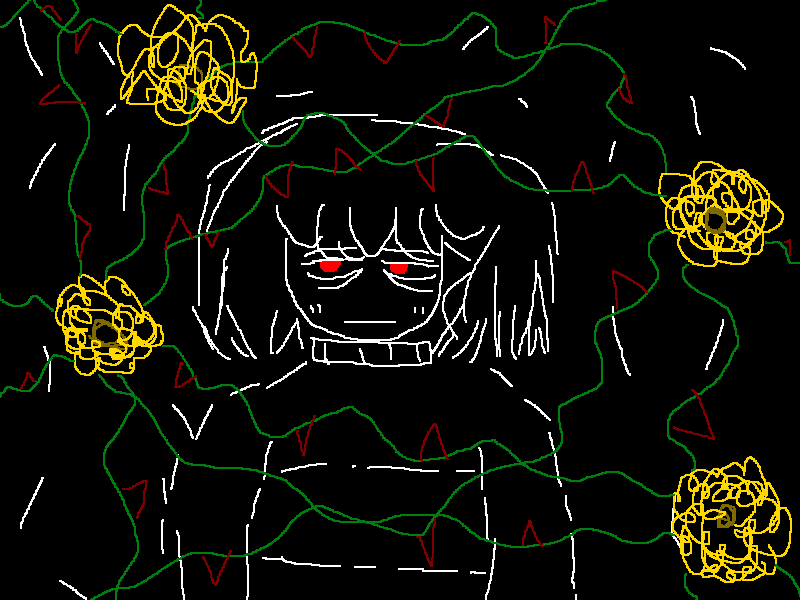 this body feels so heavy.
i don't want to move anymore.

march 11th, 2020. i don't want to do anything today. same as any other day, always the same. of course, of course. i feel especially non-existent today. at least working on this place is interesting. it's a maze of pointless self-inflicted pain and suffering, just like my own mind. and i walk the path in that maze of my own design. it's all just for fun, for kicks, for laughs. i must like the game if i play it so much. sitting in the corner, all by myself. the way it's meant to be, isn't it?

i don't know. i don't even feel like writing anything like this right now. i'm just doing it anyway to fill space. but fuck it. i'll just stare at the ceiling now or something. one of the few things i am skilled at.

march 15th, 2020. it's so easy to make myself invisible. but i suppose i'm somewhat skilled at it by now, anyway. it's easy to keep everything hidden, to draw as little attention as possible, to remain isolated even at my lowest. that's how it always is, that's how it always was. so it is simply more of the same, i suppose. more of the same. no one cares, and it's all according to plan. very clever, don't you agree? well no, of course you don't. "you," the theoretical reader, do not exist. no one but me is reading this. and even if that somehow weren't true, it may as well be. what difference does it make, really? anyone who reads this will forget. nothing about this is unique or special or interesting enough to linger in one's mind. it will be forgotten as quickly as it is consumed. my mediocre creation may provide about 10 minutes or so of distraction, and if i am very lucky, a small provocation of emotion. merely a tiny chunk of entertainment for someone spending their precious time browsing strange websites on neocities one fine sunday afternoon. if this site didn't exist, there would be another in it's place for such a wanderer to find slight enjoyment in. i am replacable, unnessecary, forgettable, and so is this site and everything else i have or will ever produce.

yet, even knowing all this, i continue on in my worthless ventures.
why?
...
hell if i know. maybe i really just have nothing better to do.

august 8th, 2020. not much has changed. if it has, only for the worse. time is really slipping by now. guess it only makes sense, even when it doesn't. well, i upgraded the site so i can have music and shit on it. i think i want to try and update it more often again. it's relatively simple to do, so less work and less energy spent, more possible for me. that being said, i'm spending most of my day in bed now, so even this may prove to be difficult. oh well.
i just feel so exhausted. and so confused. just trying to think about what i should or could do is extremely difficult. because i have nothing to hold on to. i have little in the way of concrete opinions or ideas or anything i can regard as totally true, if that makes sense. there are a million reasons why i might be this way, a million things that might help, a million mindsets to put myself in. and i have no guide, no direction, no inkling one way or the other. so i just run my head around in circles, swinging and swaying at nothing, making myself more and more confused just by trying to think at all. and at that point i just have to call any rational thought off and dissociate pretty much. i don't know. i'm paralyzed. it feels that way, anyway. i feel locked in, like i can't move. i'm too scared to move, too confused to move, i want to make the right choice but i don't know what it is and i can't just pick something because my mind won't allow it, i've convinced myself that freezing in place and doing nothing is better than risking whatever might happen if i choose something that isn't perfect, that doesn't work. or maybe i'm just lazy, or maybe, or maybe, all these different fucking things, even talking about it now i can't make up my mind. thinking about doing anything at all just fucks me like this. but if i don't think, then i go along with what i usually do and just do nothing anyway, i don't try anything. it's like some catch 22, damned if i do and damned if i don't. if i try to think about it, i freeze up and do nothing. if i don't think, i fall into habit and do nothing. something has to drive me to action, but there is nothing to drive me to action. someone else can drive me, but the problem of me not driving myself still exists. even if i have a concrete thing i need to do, i still often don't do it. why? i don't know. it's like i just don't care enough. i care enough to feel distressed over it, but not enough to do anything about it. and something about that terrifies me. because i have no idea what to do about it. people always say, you can only be helped if you want help. but what if i can't get myself to want it bad enough? it seems like there's something in me that doesn't care, that couldn't give two shits if i were to rot away in a dumpster or whatever. and that part of me is extremely overpowering. sometimes i almost become convinced that it's all there is. maybe that's why i feel so paralyzed. i feel like i'm stuck in a body that won't move or do anything, it just rots away in bed all day every day, wasting time, distracting itself. not that what i am inside is any less of an empty husk than the outside, but you know. i just feel like i'm going insane. i'm asking the same questions over and over, saying the same things, trying to say something i can't articulate. i keep hoping the outcome will be different, yet it remains the same every time, every day. i'm still doing nothing. i'm still not getting better. i'm doing something very, very wrong. and trying to figure out what that might be just makes my mind work itself into a frenzy that ultimately ends up exactly back where it started. everything just sets off that same cycle. someone giving me advice, reading something someone says, my mom talking to me, my therapist, myself. it all sends me around the same circle, just with different viewpoints, opinions, information, ideas. but it's all just thought, it's fluff, it's not action or behavior, it doesn't change anything. the only thing that will ever change anything is if i start doing something. but i don't. that's what it all comes down to every day, when i'm lying in bed neglecting my life as usual. staring at the ceiling, falling into an uncomfortable 2-3 hour rest and waking up in the evening again. that's what happens no matter what. it's the only thing that's real. everything else, i can't be sure of.

november 22nd, 2020. things are changing. it's hard to put into words. things like this often are. but things are changing, and they're changing awfully quickly and strangely. i can feel it. i can feel so much, it's overwhelming. and i don't understand much of it, although i wish to. i feel more and more understanding as time goes on, though. i feel like something is really happening. but it's very strange in the sense that there's no seeing it. it isn't something you can detect, something you can measure. it's just something i feel, something i know. this is why it is hard to explain. there is no real word or phrase for these things, no description, no analysis. it simply just is. and that is something very special, very delicate, very unforgettable. the truth is not always what you might expect. it's not always what you are told. i mean, that's obvious at this point, isn't it? maybe. i don't know. i don't know much. but i know i don't belong here. i know there's something more to all this. even now though, i feel myself holding back. i feel myself trying to be vague, trying to dodge saying anything that might seem like "too much". i still cling to this world and its standards, even when i know i'm not meant to be a part of it. luckily, i know that's just my own fear, my own self-doubt and self-censorship, and it can be overcome. hell, it might not even be "me". but whatever it is, it's writhed its way inside me and put my soul into a chokehold, leading me astray from the right path. i'm starting to understand how i can truly heal. my sickness is a spiritual one, that extends itself to my mental, emotional, and even physical health. sometimes i wonder if i'm being attacked by something, but i don't know that for sure yet. i just know that i have to keep going, keep thinking and feeling, and trying to remember. it's, again, hard to put into words. but i know what i have to do. i know who i'm meant to do this with. and everything i don't know, i'll perhaps know merely once i'm ready to. but uh, yeah. just some thoughts i've been having. you know. same as always. but it won't be for long.

visit https://9chan.tw/fallen/thread/7 for more entries.
can't be bothered to paste it all here.